Launched in 2005, Choose Your Voice has been distributed to schools at no charge in every province and territory, and has reached over 2 million Canadian students. Now the program is provided online to teach your students social justice while meeting curriculum requirements.

Choose Your Voice (CYV) links to curriculum requirements for grades 6, 7 and 8 in every province and territory. It meets objectives for:

Curriculum connections (To be updated soon) 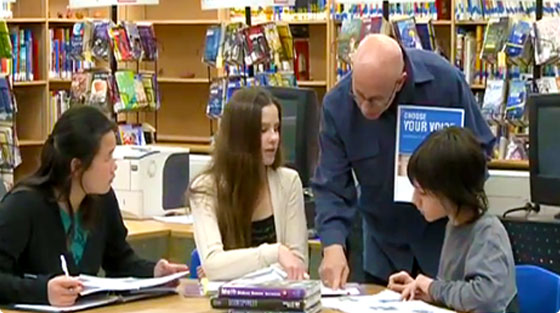 Watch students talk about how Choose Your Voice has changed them.

“Before we started learning about the Holocaust, I wasn’t really sure what it meant. I was in for a real shock. I find it difficult to comprehend that some people could be so cruel. The killings were so systematic. They had a plan that they thought must be followed. I learned that hatred breeds hatred, and if we don’t learn about the past, history will repeat itself. If it did, I would hope I had the courage to stand up and speak out against it.”
– Student, Nova Scotia

“Choose Your Voice enlightens, empowers and teaches the children, not only about themselves, but also of the importance of a world that is free of racism and free of judgment. It encourages them to love one another and respect other people, no matter where they are from.”
– Principal, Vancouver School Board, British Columbia

“This is such a fantastic [program]! I’m so impressed with the content and activities. Whoever designed it, really understands what teachers need in a program –it’s well balanced with multimedia, group/independent work and follow up.”
– Teacher, Upper Grand District School Board, Ontario

Q: How much does Choose Your Voice cost?

A: It is offered free of charge to all teachers, school boards and other educators.

Q: What grades is CYV designed for?

A: It was developed for grades 6, 7 and 8 but has also been adapted for grade 5, high school applied courses, gifted learners and ESL students.

Q: Is there a French version?

A: Yes. Click on Français link at top right of window. Each page toggles directly to the French equivalent.

Q: What subjects is it used for?

A: There are provincial curriculum links to Social Studies (history and geography), Oral and Written Communication, Media Literacy (English and French), the Arts – drama, Music and Visual Art. It is also used in Religion and Physical Education (Health unit) classes.

Q: If high school teachers use it which subjects does it link to?

A: It can also be taught in Applied courses for History, Social Sciences, English, French, drama, visual art and music. The video may be shown to all grades and is often shown in school-wide assemblies.

Q: How long does it take to teach the program?

A: The program is flexible and can be taught as 4 separate lessons or one unit. One lesson can be done in one class, one week or even a month, depending on how many activities you choose to do.

Q: How long is the video?

A: The video is 22 minutes long and is divided into 4 segments that correspond with the 4 units in the Learn menu. It can be shown in 4 separate classes or in one viewing. A Video Discussion Guide is included in this site and is used in discussions led by teachers back in their classrooms after the video has been shown.

Q: If I’m confused about something or have questions, do you provide support?

A: Yes. See the CYV Contacts page and email or call your regional director.

Q: Do you provide teacher training or workshops?

A: Yes, workshops are provided at no charge in locations where there is a local FAST Director or Program Coordinator and only if there is enough interest from groups of 15 teachers or more. Generally, the school boards prefer to organize the workshops. If you’re interested, call your local board or the regional coordinator.

Q: How many Canadian students have been taught CYV?

A: Over 2.4 million students since the launch in 2005 in Ontario until the present

Q: In which provinces and territories has CYV been taught?

A: Schools in every province and territory received kits when they used to be mailed out from 2005 to 2014.

Produced with the generous support of FAST-Fighting Antisemitism Together

FAST gratefully acknowledges all contributors to Choose Your Voice.

Fact Sheet photos were reprinted with the permission of the following:

Websites and other sources used to research Fact Sheets for Choose Your Voice include the following: